Concatenating cell value to include C.F. and GREATER/LESS THAN in relation to cell color

Not certain this can be done but wanted to reach out before I wrote it off.

I have 5 cells (C4,C6,C8,C10,C12) that have percentages. Those are conditionally formatted with the Green-Yellow-Red Color Scale. If there are 5 different values in the cells, it displays the following colors: 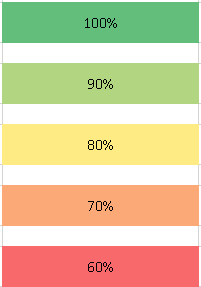 In the adjacent cell to the left (B4,B6,B8,B10,B12), there are department names listed. For ease of understanding for anyone else viewing the file, I used the concatenate formula in the adjacent cells to the right (Column D):
=CONCAT("iF "&B4& "department gets a call, it will be answered with the " &(random cell)& " priority.")

In the random cell, I was trying to get the colors of the cells to work along with IF statements so that whichever of those 5 cells has the highest percentage, it adds which priority will be assigned into the concatenated formula. (Dark green would be HIGHEST, Red would be LOWEST. With the other 3 colors somewhere in between on the spectrum (SECOND HIGHEST, MEDIUM, SECOND LOWEST)) .

I may be overcomplicating it, but is there a way to utilize C.F. color along with IF statements to help determine which of the cells would have the highest value all the way to the lowest value? Or would it be easier to just use multiple IF statements to compare all 5 cells' values and come to the same result? And then with those results, determine which of 5 priority values would be populated in the concatenated statement? I'm really bad with embedded IF statements and would need help.

(EX: If dept 1 on top had the lowest of the 5 percentages, it's corresponding D cell would have the formula along with LOWEST priority. But then if 2 departments had the same percentage, their D formula would display the same value)

Can you AutoAverage in Excel?
Click here to reveal answer
There is a drop-down next to the AutoSum symbol. Open the drop-down to choose AVERAGE, COUNT, MAX, or MIN
S

Not totally clear, but heading in the right direction perhaps?


At the moment, we have 5 scores and 5 priorities, but if you like, this could easily be generalised for n scores, m priorities, n<>m.
Solution
D

Stephen you're amazing! That's exactly what I need it to do. Thank you a great deal!!!

And it eliminates the need for a VBA code which I was trying really hard to steer clear of.
S

You're welcome. I'm glad we could help.
You must log in or register to reply here.

D
Change cell value based on C.F. color of another cell

Oct 6, 2021
Woodpusher147
W
K
Find duplicate data from pair cells and then pick and put a value only to one of them (date/hour criteria)