I am trying to figure out how many employees get several different shift differentials or premiums based on the following list: 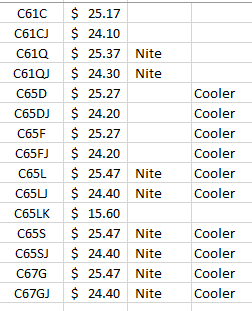 The first column lists the department code where the third and 4th columns list if that department gets both nite rate and cooler rate premium. As you see, some dept.s only get cooler, some only get nite, but some get both cooler and nite.

On a separate Tab called NEW BID in column G starting in row 5 with the first employee, is where it contains the departments per above list that employees are designated.

Can you AutoAverage in Excel?
Click here to reveal answer
There is a drop-down next to the AutoSum symbol. Open the drop-down to choose AVERAGE, COUNT, MAX, or MIN

Where $A$1:$D$10 is the department code list on the first sheet.

Where $A$1:$D$10 is the department code list on the first sheet.

Hi, thanks for the reply. So I tried out the second one with just cooler but it is yielding zero: 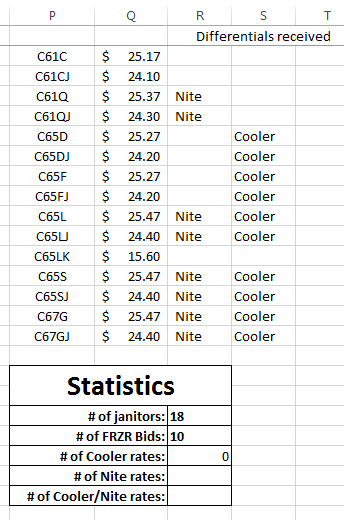 P2 on the First sheet which is called "Shift Info" is what starts my first department and S16 contains cooler for my last dept. C67GJ. on the New Bid Tab, I just did G5 thru G300(there aren't that many but I'm just allowing for possible expansion)

Did I get something wrong in the formula?

I can't see a problem with the formula. I'd start taking the formula apart. Try the vlookup (without the sumproduct) on each row of the 'new bid' sheet to see if that is working. Maybe there is an odd space on the department name or it could be an oddity with the word 'cooler' in 'shift info' sheet.

The whole thing is working quite nicely on my sheets. Columns H and I are just to check the results.

I'm sorry, but I've checked my formula, and I have everything exactly how I believe I should have it. I have the formula for counting "cooler" in the "Shift Info" Tab which also contains the table of departments and which ones get nite and which ones get cooler.
Here is a screenshot of the Shift Info Tab: 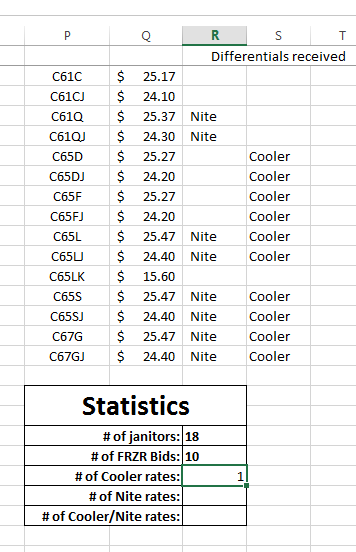 Excel Formula:
The "New Bid" tab pictured below is what has the listing of departments for each employee, although I don't know if it makes a difference or not, but that column that contains those departments is formula driven to yield those departments via lookup. I wouldn't think that should affect anything. 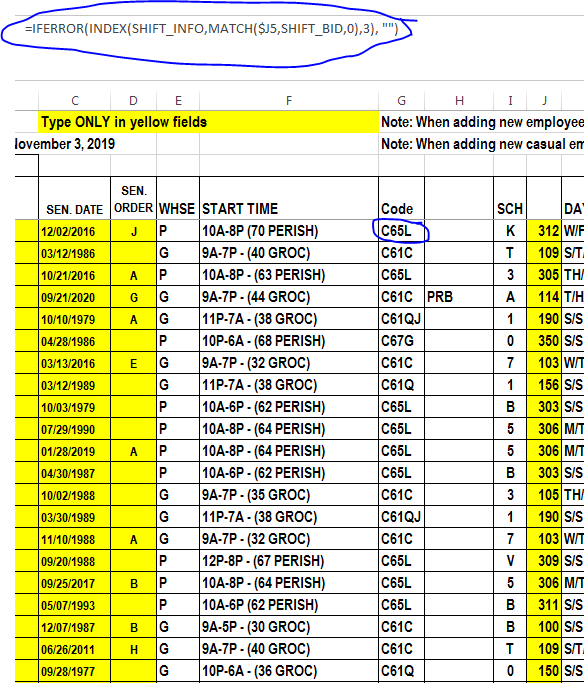 I can see that yours does work but I just can't see where mine doesn't.
B

Maybe it's an excel version problem.

Fluff said:
How about

Unfortunately I'm not getting results with that one either. Here is what I did again trying for cooler rate:

From the Shift Info Tab: 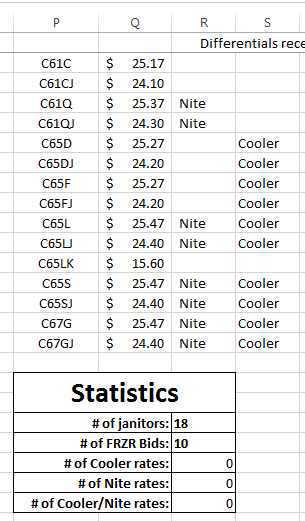 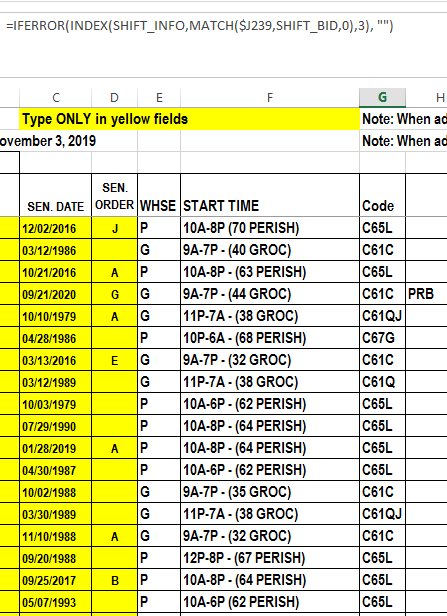 The formula pictured is what is contained in G5 of the New Bid Tab and so forth. Again, I see that yours works, but I can't understand why mine wouldn't. As far as I can tell, I adjusted mine to pull from the correct sections.

I don't understand what could be causing this. Surely the fact that its on 2 different tabs shouldn't matter, right?

Try confirming my suggestion with Ctrl Shift Enter, rather than just Enter.
You must log in or register to reply here.