Hi, I'm hoping someone can advice, I am getting unexpected and useless results on a data validation.
I've tried several various attempts, and they either seemingly do nothing (ie, allow any entry regardless), or they reject all entries even if they shouldn't.

I'm trying to input data into column AA, where data validation stops new entries or edits that will raise any cell between AK2:BF501 above 58.
To this end, I'd tried a direct formula in the data validation: =countif(AK2:BG501,"<58") which allows anything at all, yet =countif(AK2:BG501,">58") rejects everything, in both these cases I used test numbers below 10 and in the 90s, so in eitherformula, only one of the test numbers should have been allowed.

In a work-around attempt, I have set BG2:BG501 with formula: =COUNTIF(AK#:BF#,">58") where # is the cells row from between 2 and 501, and then in cell BG1 =sum(BG2:BG501), effectively any number but 0 in BG1 means there are cells in the range containing anything above 58, but as long as BG1=0 then I know there are no offending numbers, and based on this I used the formula =BG1=0, which when in a cell returns TRUE or FALSE depending on BG1 as I'd expect, but when I copy that into data validation custom formula bar, it doesn't prevent any entries at all, again having tried numbers above and below 58.

Long story short, where am I going wrong? I've never used custom data validation before and so far it just doesn't seem to operate as I'd expect. Googling it gives a lot of info on dropdown menus based on other formula, or some quite specific examples of isnumber formulas or istext or no duplicates, but nothing I can find relevant to what seems like quite a simple request.

Any help would be really appreciated!

You are having problems using logic. You want an expression that will be TRUE to allow data entry, and FALSE to prohibit data entry.

Here is the problem with the two expressions you tried:

Hi, thanks for your reply! However, I'm still not getting necessary results!

Column AA has data validation copied and pasted from your suggestion.

The range it is checking is as follows (I've not done all the rows, but it's just more dates dragged down:

And Colums AB - AD have Data Validation based on the same formula you gave, except modified to another range BI2:CD501 and the max being 13 (the number of physical tables)

In either case, there is no error displayed and the data is allowed, bringing my headcount above 58 and my tables above 13.....

Thanks for for the help so far

I guess it's because of absolute reference, try:

Habtest said:
I guess it's because of absolute reference, try:

Thank you so much - the first works perfectly, but I am still getting trouble with the second Data Validation. 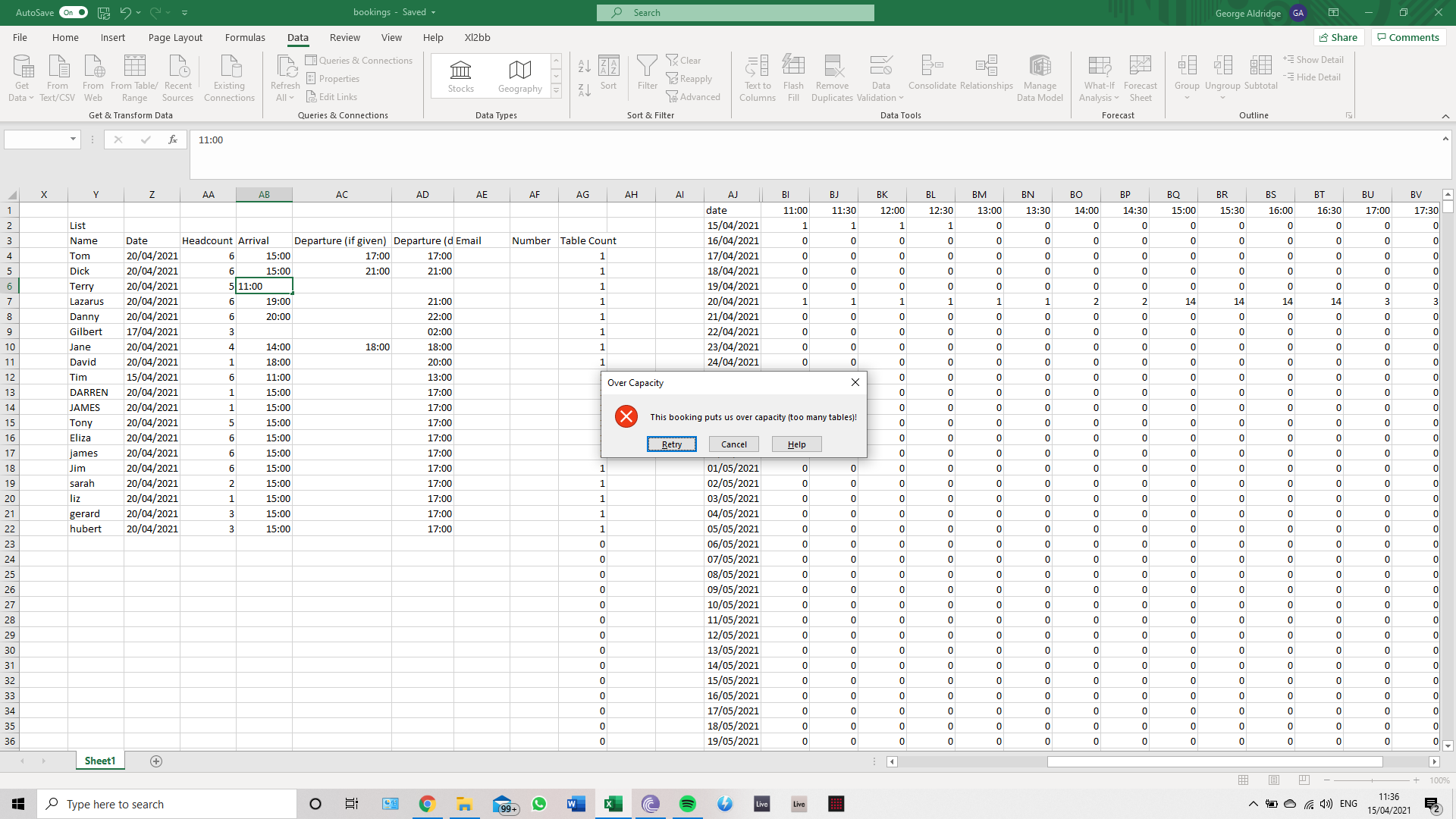 Again, any help would be really appreciated! As you can see in the picture it's triggering an error with a new booking at 11am, when the bar is otherwise empty.

TheSubject said:
Thank you so much - the first works perfectly, but I am still getting trouble with the second Data Validation.

Again, any help would be really appreciated! As you can see in the picture it's triggering an error with a new booking at 11am, when the bar is otherwise empty.
Click to expand...

I think it's working as designed. The challenge is, data validation calculates each time a cell is filled and blocks entry, even when a line item is not complete yet. One workaround is to automate all other dependent cells (as you did for most cells in column AD) so as to limit manual entry to one cell only.
You must log in or register to reply here.