Hi all. I am new here, so apologies if I miss any conventions with making this post. I'm using Office 365, on Windows.

Here is a link to a screen-recording of the spreadsheet/dashboard. (Unfortunately the screen-recording does not capture the drop-down list, for some reason, but you can clearly see that I have clicked the arrow and selected an option.)

I am making a 'dashboard' of sorts, for a database I have constructed. The database contains 130+ rows, with each representing a chemical compound. The compounds are named with a numerical code and a letter (e.g. 864.3a), and each of them is accompanied by an image representing the chemical structure, in an adjacent column. Currently, I have used data validation to generate some drop-down boxes, which I have coded to filter the 130+ compounds into a dynamic list. This list appears on the right-hand side of the screen, and is a spilled range. The same list appears as options in the drop-down box under "Compound" (not captured in the screen-recording); I have used Data Validation for this drop-down and have used the spilled range as the source. Once I select an option in the drop-down from this spilled range, the corresponding image appears next to it. I have essentially achieved this by following the steps in this video.

What I want to do now is have the corresponding images appear alongside the dynamic spilled range, which of course changes depending on the parameter(s) selected in the drop-down (grey box). I have tried using Name Manager in conjunction with "=INDIRECT" as per the video above, which works in the first instance. But it seems that this method doesn't work with spilled ranges.

I would greatly appreciate any help! Thank you kindly for reading and thank you in advance for any suggestions or solutions.

It works fine with spilled ranges, but it is some work as you will have to create a separate named formula for each of the images placed next to the spill range 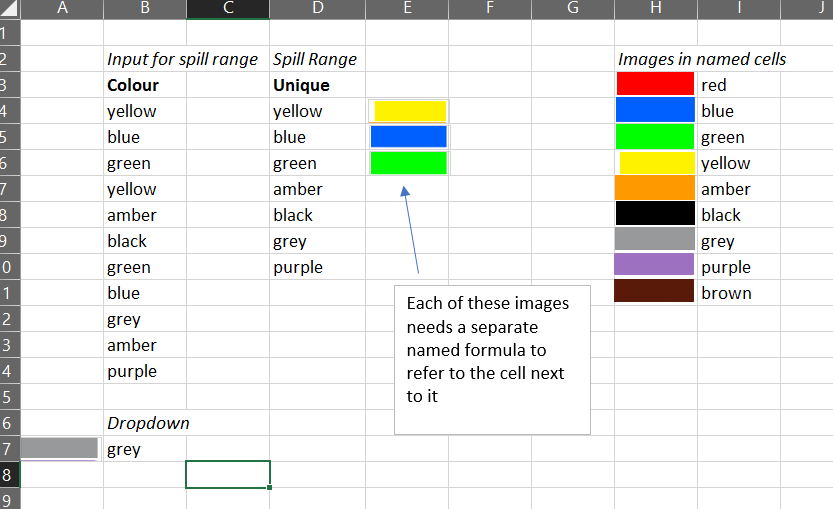 sijpie said:
It works fine with spilled ranges, but it is some work as you will have to create a separate named formula for each of the images placed next to the spill range
Click to expand...

Thank you very much for your reply. I'm not sure I understand, though. In your example, for column E, do I use the "INDIRECT" function to refer to the each cell of the spill in column D? I have tried just referencing the spill, rather than each cell individually.
You must log in or register to reply here.

C
Linked images and 'Reference is not valid'
2