I am trying to find a way to harmonise the way a product is coded from various ways people may have entered it (i.e., the cut of fish - in parentheses here but note that this is not always the case).
For example, in the sample data below, "Gutted" and "whole gutted" mean the same thing, but "headed & gutted" is a different thing, and "whole" alone is yet a different thing. 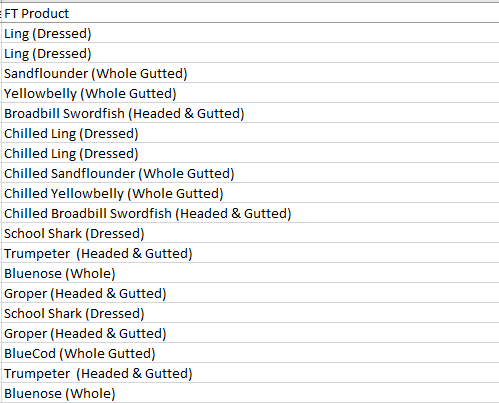 I am trying to automate the translation of these multiple possible terms people may use into a standard state code, by means of a formula in column B.
I have created a list of possible ways to name various cuts of fish (i.e. StateName) in a different tab "States translation" (column A), and the corresponding standard code (StateCode) next to it (column B).

I have made these two lists into arrays that I have named "StateName" and "StateCode" and that I would like to refer to in the tab where my raw data will be.
As you see in the two columns above, different states may include the same terms (e.g., gutted is found in GGT, GHCO, HGT and HGU) and so I have organised my list of possible terms in a hierarchical order, so that the search should end when the first matching StateName is found withing the string in column D.

So for example, for the fifth term in column A, "Broadbill Swordfish (Headed & Gutted)", I'd like the formula to return HGU (rather than any of the codes above).

I have tried various methods (lookup, index, match) unsuccessfully as they either find multiple matches or result in lists of the same length as my arrays.

I have a very manual and inelegant solution to this problem, using IFS, ISNUMBER and SEARCH, but I am sure there must be a much more straightforward way than this:

Many thanks for your help!

PS: Note that more state names could always be added to my arrays later on if it turn out that people have used names that were not covered in my current lists.

Peter_SSs said:
The $ signs that you added in from of the column letters will not hurt, but were not needed. Since the formula is being dragged down (not across) it is only the row numbers that need anchoring with $ signs and my formula already had $ signs before the row numbers. All you really needed to do was increase the 83 to 200.
Click to expand...

Ah yes, got you! Thank you.

That does the trick perfectly!

chris32 said:
Is there a way to not rely on finding the parenthesis and independently searching for the substring?
Click to expand...

I don't see how you could logically decide what part of a multi-word string is the substring to look for if there is nothing to identify it?
Click to expand...

Hmm, I am not sure, I am not up to scratch with search functions! I have used the ISNUMBER(SEARCH()) combination with individual strings and it seems to be searching for the exact substring amongst the whole string without needing a starting point, like here:

Excel Formula:
However, I have no idea if something like this could be used here where we need to search an entire list of possible terms instead of an individual search term - i.e., something like : ISNUMBER(SEARCH({StateName},D2) in which StarteName would be my list {"headed and gutted", "whole gutted", "gutted", "whole", ...}

PS: apologies, I had not yet seen your response when I sent the previous message.

Wildcard in VLOOKUP
Click here to reveal answer
Use =VLOOKUP("Apple*" to find apple, Apple, or applesauce

Excel Formula:
In relation to not using parentheses to locate the term, I don't think you understand the problem - or else I don't understand what you are saying.
Take this example
In B1 I am looking to return the value from column E that is associated with the substring in parentheses. Clearly the expected result is "C"


Now, consider this example that does not have the parentheses to identify the substring to search for.
What should we expect in B1 since it could be any of the three possibilities? And what is the logic to get the result?

Peter_SSs said:
In relation to not using parentheses to locate the term, I don't think you understand the problem - or else I don't understand what you are saying.

Now, consider this example that does not have the parentheses to identify the substring to search for.
What should we expect in B1 since it could be any of the three possibilities? And what is the logic to get the result?
Click to expand...

thank you again for your help!
I understand the problem you mention now. I probably did not explain the data I am dealing with well enough, sorry about that!
The customer entries contain up to three types of information: the fish species (ling, snapper, butterfish, etc), the state (gutted, whole, etc) and most of the time the freshness (chilled vs. frozen). These three types of information can be input by the customer in any format (with or without parentheses around state or freshness) like in column A below:

I think the difficulty you mention of finding several matching terms in the costumer entries should not be an issue here, because the terms related to state (in yellow) should never overlap with terms related to species or freshness.

Terms that describe a state can overlap however, which is why I need to carefully order my list of possible states and have a search for exact matches, so that the formula finds the appropriate/shortest substring last (e.g., for "Chilled Ling - Whole", it should find the 5th state "whole" and not do a partial match on "whole gutted" for example, coming up with the wrong state).

Does it make more sense?

Just wanted to let you know that I have found a formula that works for me with the help of a colleague:


Excel Formula:
Thank you for all the help!

Glad you have a solution but I have a few comments.

you are right, the formula returns 0 rather than "check". Do you know why it might be?

Good point on the column reference. I have adapted the formula to search a specific array rather than the whole column.

My bad regarding the Excel version, I have checked and it is Excel 365. Hope that it did not send you on the wrong track with my problem! I have corrected the information in my profile.

Yes, I was looking to find states in the "States translation" list within the larger customer entry in the "Raw data". Sorry for not explaining that more clearly.

Many thanks for your help and many inputs.

chris32 said:
you are right, the formula returns 0 rather than "check". Do you know why it might be?
Click to expand...

Yes. Because the range (whole column) in 'States translation' contains blank cells, the SEARCH functions finds that at the beginning of all your J column cells so returns a 1, which meets the ISNUMBER() criteria. The "check" in that formula is returned only if ISNUMBER(SEARCH( fails for every row in the range - never going to happen with blanks in the range.

You could try this instead. Just check the range is big enough to accommodate the longest list you are likely to get in 'States translation'.

Peter_SSs said:
You could try this instead. Just check the range is big enough to accommodate the longest list you are likely to get in 'States translation'.

that makes sense. This version works perfectly! Many thanks for your help

You're welcome. Glad to contribute.
You must log in or register to reply here.

Jul 29, 2021
Mariami
M
C
Detect Presence of a Value From Another Worksheet
2