Seeking advice from those with accounting experience. I'm looking for a way to project/forecast transit ridership for 2021. I currently have monthly stats only for January-Dec of 2019 and 2020 :


Obviously, with the pandemic has skewed 2020 stats. Is there a good way to project MONTHLY ridership for 2021? When I use the Forecast function, it appears to calculate the yearly TOTAL and takes the average from that.

Thank you in advance.

You've asked a complex question. Before moving forward with conventional statistical analyses, I would recommend trying to understand the causes of some trends seen in your data set. For example:
Perhaps April 2019 - March 2020 offers a better picture of otherwise normal ridership in the pre-COVID era, with more variability to be expected during the winter months. And August 2020 -December 2020 should represent new expectations based on arrangements that have been made to deal with pandemic concerns. As more of the population receives COVID vaccinations, and more is learned about the risk of emerging COVID variants, it will be interesting to see if the ridership levels eventually begin to rise again to approach those seen during April 2019 - March 2020. For now, however, it appears that a new, lower baseline has been established.

Answers to these observations might enable you to develop an expected ridership profile. To visualize your tablular data, I created a somewhat confusing plot, with 2019 and 2020 data over/under each other, as well as 2020 shifted out to the right of 2019. 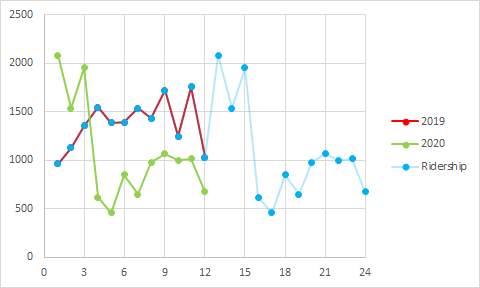