I'm trying to automate an existing manual report like the one below, that shows major categories ranked by their sales volume, and then ranks individual merchants within those major categories.
Note that:
This is the report output: 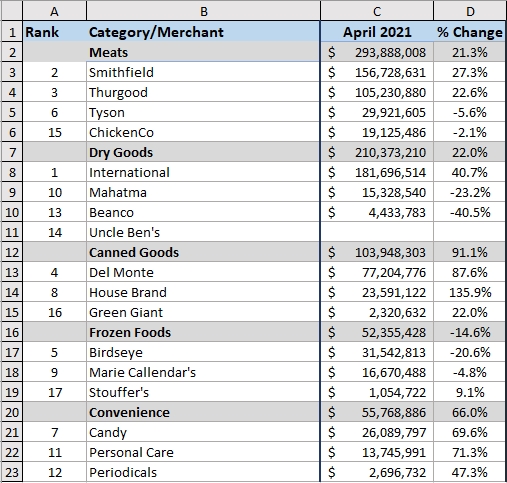 Data for the merchant rankings is in this table: 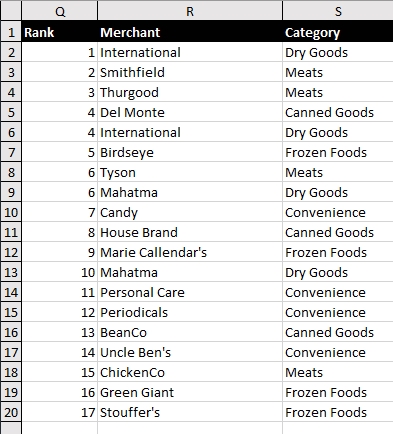 And rankings of the major categories are in this table: 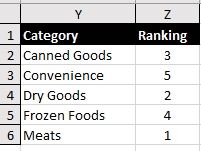 I'm using SUMIFS to get the totals by merchant, so I don't need to include those in the formulas. I'm looking for how to identify when a new category starts, which category that is, how many merchants are included, and which merchants those are (ranked).

Because of security policies, I can't do this with VBA. I'd like to avoid pivot tables. All of the rest of the report has been updated with dynamic array functions. Can you find a way to do this entirely with formulas?

Thanks in advance for even taking a look! I think this is a complicated one.

Please modify your profile to reflect the version of Excel you are running. Also, if you use XL2BB it will make it easier for someone to use your data rather than to have to retype it or create fake data.
T

Maybe I'm missing something but why is ChickenCo ranked 15 rather than 9?
T

kweaver said:
Maybe I'm missing something but why is ChickenCo ranked 15 rather than 9?
Click to expand...

Human error. That's why this report needs to be automated. It's not my design; I'm trying to take it over, and I've done 95% of the rest of the report, but can't seem to figure out how to get this ordered rank within the ordered rank completed.

Thanks for taking a look and for any help you can offer.

BT
You must log in or register to reply here.

Multiple IF functions with ORs and nested VLOOKUPS or INDEX MATCHes