I've tried a whole lot of different permutations of an admittedly fairly new thing for me in Excel: Pivot Charts.

I have monthly data for four different players in TWO categories: Homeruns and Stolen Bases.

Can I produce a chart, Pivot, combo, template or otherwise, that can filter:

I want to associate a player's HRs and SBs as well as associate all the SBs, all the HRs. What's happening is the eight different entries (4 players SB and HR = 4x2=8) are the filter rather than the categories of -Player -SB or HR

I understand that Pivot Chart's have an issue of retaining styles through the different charts you filter through---I would've settled on just distinguishing the way SBs and HRs show up on the chart like the image below, but the style can't be maintained through the different charts/filters. Once the page refreshes when embeded the 1st style comes back---but I can't actually save any other single player chart filter in Excel without it undoing changes to the original... 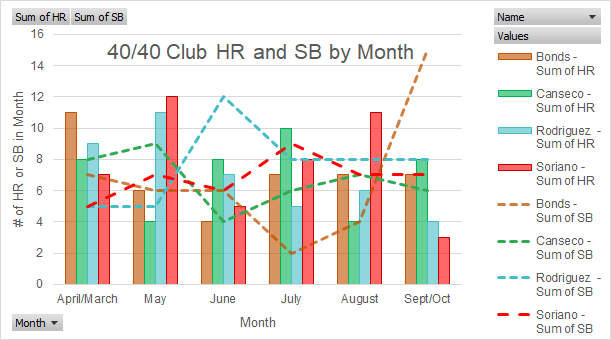 What's the significance of what look like buttons at the top-left? Sum of HR/Sum of SB. If that could just filter between SB or HR or Both that'd be perfect. Instead, they're just kind of labels? But that's what a key is for. They are like the data itself. Just can't filter SB/HR AND Name. Just name and by month on the x axis, the latter of which I don't really want. Tried variations while creating pivot tables. Can a table be filtered by two different values in same axis (Name and SB or HR?) Is two filters like this possible? I'd think it's needed for anything like school and grades. Filter by student AND by subject with Quarter on the X axis like months is here... Retaining styles through "filters" is kind of required too.

I've tried about every variation of X and Y axis. Grouping and ordering by stat or player. Many different Pivot Tables to Pivot Charts. Regular Charts from pivot tables. Additionally is there a best way to embed Excel charts and iframes like this in HTML? Nothing shows up on hover except "PivotChart" for the whole chart when I embed via OneDrive. Responsiveness is being tricky as well, but that might just be me.

Thank you so much. Be well everybody!

I'd like to be able to see just dotted lines (SB) or bars (HRs) or both like this, as well as by player. Thank you!
W

I've tried a few ways of categorizing scores by type (SB or HR). Would all of this be better done with a slicer? While still being a "embeddable" chart for the web.
You must log in or register to reply here.

D
Help me Identify where do these values come from

N
Adding to table rows whilst keeping my chart dynamic.

A
How can I filter a pivot table with two combo boxes and subsequently open the corresponding PDF file?

Jan 12, 2021
AKing_1st
A
A
How to filter a pivot table with an ActiveX combo box set in another Sheet?