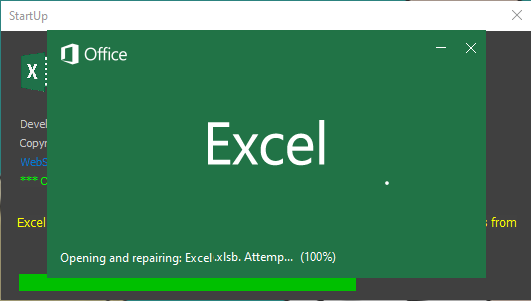 Splash Screen should only open when excel is full loaded and sheet1 is active,
Code for Splash Screen is below the splash screen has a progress bar on it and 4 x messages will pop up. All this works fine,

Return population for a City
Click here to reveal answer
If you have a list of cities in A2:A100, use Data, Geography. Then =A2.Population and copy down.

Are U sure that it doesn't have something to do with the file... your image shows that XL is repairing? Why not just get rid of the sheet activate code and simply show the userform on workbook open? Dave

Dave
Having checked my image again, you are right it is stating repairing. This was due to the code crashing as the it would run before excel had fully loaded, as showing in the image, the image does show excel at 100%, however that was when i captured the image, you can see the green progress bar in the background is about 75%.

I did as you stated above, however I am still having the same problem.

This might be a possible answer, however I do not fully understand it and how to use it with my code Mr Excel

Not sure if it will make any difference in your situation but have you tried putting DoEvents in your workbook_open code.

Do U have addins that need to be loaded before the wb opens? The DoEvents might work or perhaps this bit of wizardry from Jon Peltier might help...

Code:
If none of that works, U can trial making sure that the file isn't in an error state. Close excel and open the registry editor (type regedit in the search box). Follow this path...
HKEY_CURRENT_USER\Software\Microsoft\Office" & Application.Version & "\Excel\Resiliency\startupItems\
and see if the Resiliency\startupItems\ exists and if there are some numbers there remove them.... maybe see the stuff in this link below first.
How to detect / bypass the Workbook Recovery window and process | Page 2 | MrExcel Message Board
HTH. Dave

I have tried DoEvents, still nothing.

As the splash screen opens before excel has fully load it can not find the userform, this is the error message that I get.
I have also tried application wait time, with no luck 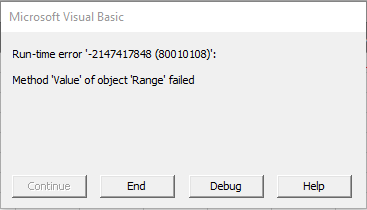 How about moving the code to the activate event :

I can not get the Splash Screen to trigger when the Cover Screen is Active I have to select another worksheet and from there redirect it to the cover sheet. See attached demo.

The Demo should work when Sheet1 is Activated, however I have to set it to Sheet2 and then back to Sheet1

I can not get the Splash Screen to trigger when the Cover Screen is Active I have to select another worksheet and from there redirect it to the cover sheet. See attached demo.

The Demo should work when Sheet1 is Activated, however I have to set it to Sheet2 and then back to Sheet1

Not sure I understand.
The splash screen works when sheet1 is activated.
You must log in or register to reply here.