Summing Every 4th Row on a Condition

I have a large spreadsheet with over two thousand rows. It also has over 75 columns, but all of them (after Column A) are a repeating series of A, B, C and D. I've simplified my dilemma with the above example. 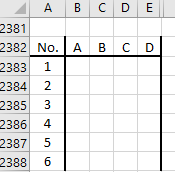 With 150 numbers in Column A, one IF statement would get outrageously long. I'm thinking this might be a VLOOKUP candidate, but I'm not well versed in using VLOOKUP. I can, however, copy a VLOOKUP formula if someone can provide it (or another function that does what I need to accomplish) based on the example above.

Thanks, in advance, for the assistance!

What is the fastest way to copy a formula?
Click here to reveal answer
If A2:A50000 contain data. Enter a formula in B2. Select B2. Double-click the Fill Handle and Excel will shoot the formula down to B50000.

Happy to help! Thanks for the update!
You must log in or register to reply here.

S
Count empty cells in every other column