Trying to work with OutlookFolder subfolders

I've made a macro (copying bits and pieces from here and there) that I want to use to be able to click it daily to see if any new projects have been sent my way, and then pull the info from those projects to post into my project data list.

Anytime the system sends me the new project data, it automatically goes to a subfolder of the Inbox called "SPACE163". I have tried to get the system to pick up my subfolder when searching mail, and it just flat won't do it. When I try to run the following code, I get "Run-time error '-2147221233 (8004010f)' The attempted operation failed. An object could not be found" at the line where I'm trying to set the Subfolder.

The macro works if I go to the Inbox.


VBA Code:
I've been able to get around the problem by temporarily turning off my Outlook Rule that sends the emails to the subfolder, leaving them in the default Inbox and grabbing only items sent by Space, but it would sure help to figure out how to be able to go back to my subfolder.

Can anyone point out what I might be doing wrong? Appreciate it much!

Hoping that this will bump the thread. I do have all of the Microsoft Outlook options selected as References in the VBA Tools. 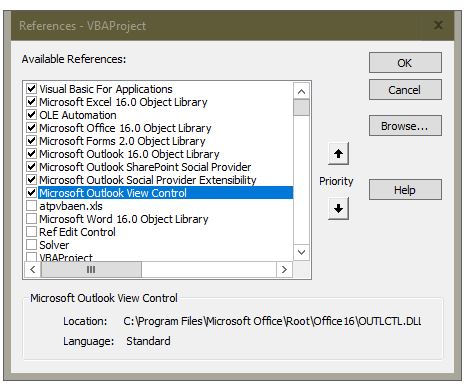