I receive reports of structured data containing phone numbers in various phone formats. Because the input is free-form, and the phone numbers can come from any country, I want to remove all characters and spaces except the digits the user inputted originally.

Does anyone know of a VBA Function using REGEX that can pull out the phone number digits and ignore special characters and spaces?

Does anyone know of a REGEX expression and the script in VBA that would pull only digits and neglect spaces or special characters (+ - ! ( ) )?

hartsie said:
@VBE313 @Fluff @Rick Rothstein -- Where ever you all are employed, I am confident you are underpaid =D
Click to expand...

I have been retired for some 18 years now so since my pension was calculated based on what I made back then, yeah, I guess I'm underpaid now.

What is the shortcut key for Format Selection?
Click here to reveal answer
Ctrl+1 (the number one) will open the Format dialog for whatever is selected.
H

I would pay for responses like all of yours in this forum if I could.

@Fluff You are definitely underpaid. However, there is no shortage of appreciation here. I can't tell you how much your replies (you have replied to me before) and this forum has changed my approach to using excel. I try to hop on to help as many people as I can, but it appears I am usually unequipped to help with the unanswered problems.

hartsie said:
I am using Office '16. Do you know if TEXTJOIN is available in that version?
Click to expand...

A quick way to find out is Excels intellisense (the version I use lacks the TEXTJOIN function ....) 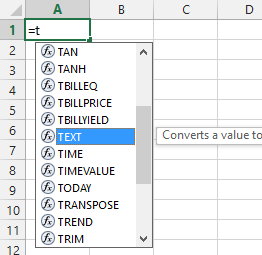 B
Separating phone numbers from text fields, keeping all the data, then moving it around a bit. And breathe.
2

Mar 23, 2021
mlou
M
D
Using INDEX function, would like to create hyperlink that also works when saved in PDF