Using Listbox to alter data in the worksheet

I have a worksheet that monitors peoples favorite snacks, see image. 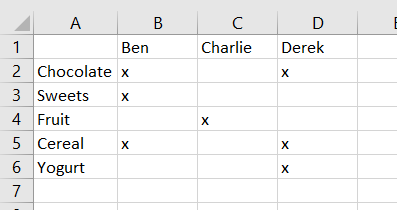 I have a combobox1 in a userform which displays a list of all names. When the user selects a name, the preferred choice of snacks appear in the listbox on the userform.
Combobox2 has a list of all available snacks.

So for example. CB1 would show "Ben, Charlie and Derek"
If the user selects "Ben", then LB1 would display Chocolate, Sweets and Cereal (I have managed to get this far)
The user can then select "Chocolate" from the LB1 and press a command button which removes it from the LB.
The could also select "Yogurt" from CB2 to add to the LB.

Finally, once all changes are made (the LB should display, Sweets, Cereal and Yogurt). The user can press the "Update" Command button, and this would make the changes in the worksheet.

Remove leading & trailing spaces
Click here to reveal answer
Save as CSV to remove all leading and trailing spaces. It is faster than using TRIM().
You must log in or register to reply here.