If you like this content, please consider visiting the video on YouTube and subscribe to the MrExcel Channel to show your support!
This video has been published on Sep 30, 2009 .
David asks why his total formulas are getting #VALUE errors. Episode 1112 shows this common problem and a solution. 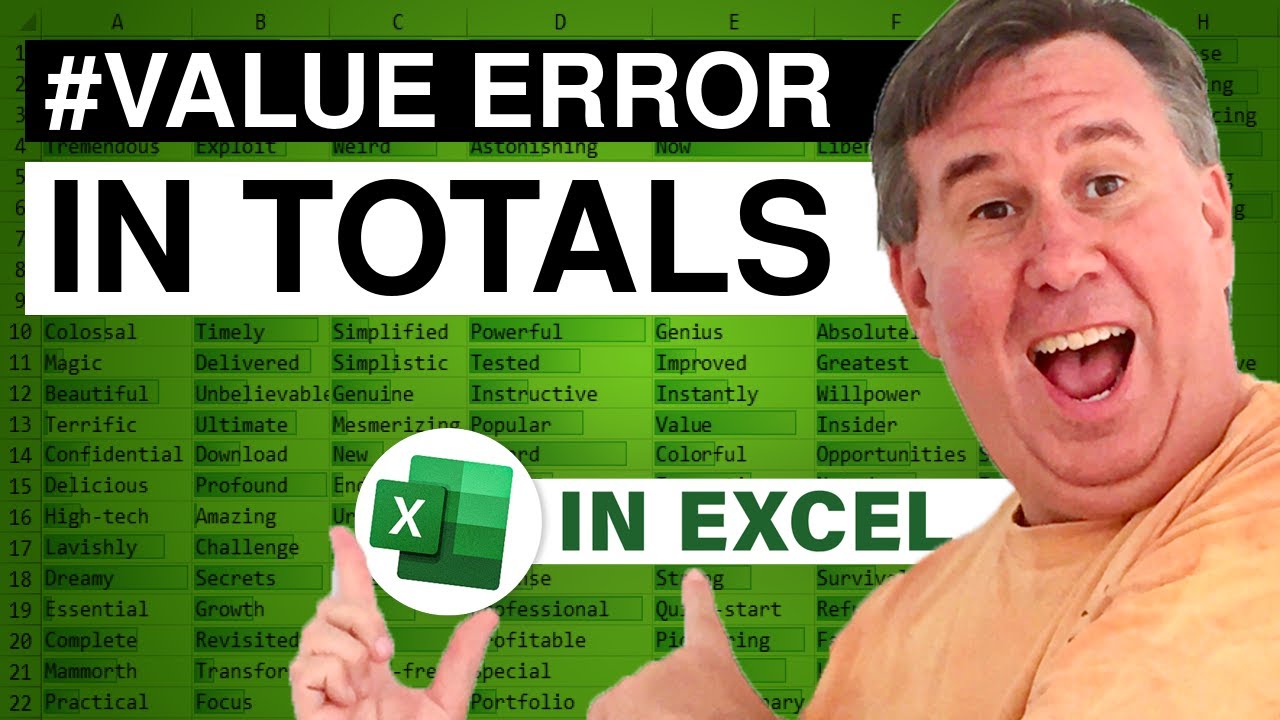 Transcript of the video:
Hey, welcome back to the MrExcel netcast, I'm Bill Jelen.
Basically, you start out with massive amounts of data, and say “How we're going to analyze this?” Well, let's fire up a Pivot table, and see if you can solve this problem!
Hey, welcome back to the MrExcel netcast, I'm Bill Jelen.
Great question today, sent in by David.
David sent us the spreadsheet, where he's trying to add up numbers for various weeks.
And he says ”Why am I getting a value error here?
I get a value error anytime that everything is not filled in.” So the first thing I did was, I came up here and said “Alright, let's go look at these cells, C8, C14, C20.” And came back here to see 8 totals.
Alright, and I see that he is doing something clever, he's trying to make the spreadsheet look really nice, and he’s saying “Hey, if there were no hours so far this week, then put in “ “! Oh well, that's the problem, because that is a space, and when you trying to add 3 to some text, it doesn't work.
So what I'm going to suggest is that, instead of doing “ “, that we go in there, and say that we want to put a zero.
Alright, and I can already hear David say “Wait, no no no, I don't want the zeros to hang out there, it looks really bad.” But what we're going to do there is, we're going to use a Custom Number Format.
So I'm going to select that cell, go into Ctrl+1, and we'll use that format for positive numbers.
But we're going to say “Hey, anytime that we have negative numbers, I want to show nothing, and also zeros, we show nothing.” So put ;; after that, click OK, and then you see what happens is, when there's a number, it shows up, when there's nothing, when it adds up to zero, then here we're going to have a true zero.
It's not displaying, but it still appears, and if you go through and do that in all the cells that are referenced out of those formulas on the right, and your value error will disappear.
Want to thank David for sending the question in, see you next time for another netcast from MrExcel!
Well thanks for stopping by, we’ll see you next time for another netcast from MrExcel!