In Defense of P.F. Changs

On November 22, 2017, an article in the Wall Street Journal headlined "Stop Using Excel Finance Chief Tells Staff". I appreciate that dozens of my friends and associates sent me a link to the article written by Tatyana Shumsky.

I read the article and weighed in with this comment which drew a fair number of likes from people reading the WSJ Online:

"Why are you using 'older versions of Excel' if you want multiple people to collaborate on a single workbook? The 120 million people using Office 365 enjoy co-authoring capabilities."

"This is a training issue: the Power Query tools available in Excel 2010, 2013, and 2016 can automatically connect your data and automate the retrieval process."

"So - basically, you have paid for expensive solutions because you did not realize that the same functionality is built in to modern versions of Excel. That is a beautiful waste of your company's money!"

I've since had a chance to talk Tatyana - the author of the article. I made my case: Power Query is the greatest feature to hit Excel in 20 years. But Microsoft has done a bad job of educating people about what Power Query can do. 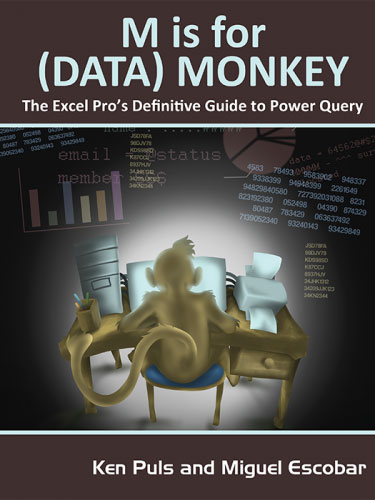 To learn about Power Query, read M is for (DATA) MONKEY.

I also enjoyed hearing that her original article was met with a lot of push-back. She admitted that "People love Excel” and she was interested to learn why. Now, in the past, Tatyana was a heavy user of Excel – even creating pivot tables. But, when she admitted that her new computer is two weeks old and does not yet have Excel, I replied with mock horror…. "Haven't you had to shop for groceries in two weeks?? How did you build a grocery list without Excel???”

Yes -- I do everything in Excel – even managing grocery lists. But, I can accept that not everyone in the world uses Excel do the extent that I do. But there are over a hundred million people using Excel as adeptly as I do.

While my argument is that Excel can solve any problem in any industry, I do have to admit that just because it *can* be used to solve a problem – it does not mean that it *should* be used to solve a problem. When a small business asks me to design an invoice program for them, I send that person to Quickbooks. Why would you pay me to re-invent the wheel when you can buy a program that manages invoices and inventory and receivables for less than the cost of 2 hours of billable consulting time?

Put yourself in the shoes of the CFO of P.F. Changs. You are collecting data from 405 restaurants spread across the country. Sure, Excel offers co-authoring today, but are you really going to have 405 people editing the same workbook at the same time? That would be insane. And – these restaurant managers – they don't live and breathe in Excel 40 hours a week. They are managing people and food and a hundred other things. They are likely weak-to-intermediate at Excel. Asking 405 restaurant managers to submit forecast reports via Excel is going to be unwieldy. I am sure this process started out years ago with Excel as a stop-gap measure. As P.F. Changs grew, the stop-gap measure needed to be replaced. I respect that.

The CFO of P.F. Changs isn't saying to abandon Excel completely. He is saying that they needed to abandon Excel for this one massively unwieldy process. That's a smart move. Once they are collecting the forecasts, I hope he circles back to Excel or Power BI and uses some of the great presentation layer tools.

Finding issue in If elseif else with For each Loop I have tried this below code but i'm getting in Y column filled with W005. Colud you please help me

Hi everyone, I would like to ask for help about the code I found and I tried to modify it but I'm not lucky to make it work. I have a total of eight

Hello all, I'm using the Index, Mode and Match array formula to show the most frequently repeated text. However, I wonder if there's a formula to sh

Hello everyone. I need help with below code. code is only chaning 1st row in mulitiselect list box. i know issue with code lstDatabase.List([COLOR=rgb

Im using a combo box to select the option. The thing I am having trouble with is that if you select the second case statement from the list (they are