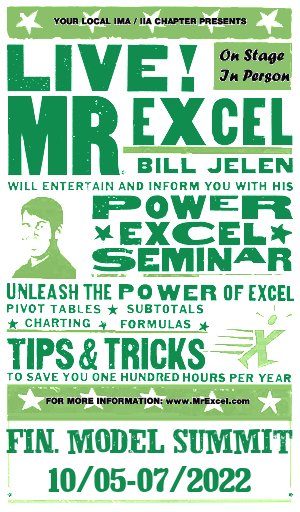 Uniontown, Ohio—When a company in Houston absolutely had to send a report by 3 p.m., a frazzled manager called Excel expert Bill Jelen and asked the impossible: a way to slice time off of a normally 40-hour accounting job with 33,000 rows of data involved. Jelen began writing the program at 8 a.m, Four hours later he delivered a one-button-click solution by email, with hours to spare on the manager’s deadline. “We saved her neck by matching up massive amounts of data from two disparate systems and making sense of it,” said Jelen—the man who plumbs solutions from the mysterious depths of Excel. For decades IT specialists, accountants and office managers have fumbled efforts to tap the work-power behind Visual Basic for Applications (VBA)—the macro language of Excel—and make the most commonly used office software in the world perform. As a young college student in the 1980’s, Jelen was shocked when he discovered that even the brightest MBA candidates at Notre Dame University could not pass a tough Lotus 1-2-3 spread sheet test. Millions of America’s leading accountants and business professionals would endure tedious manual tasks every day, simply because they could not use the features of their spreadsheet software.

When Microsoft Excel replaced Lotus as the must-have spreadsheet software in the mid-1990’s,usage difficulties followed. Jelen has conducted informal surveys that show that Excel usage is at less than half capacity in the 10 most powerful Excel features. In answer to these troubling indicators, Jelen has fulfilled his college days vow to become the smartest man alive in spreadsheet programming and crack the mysteries of Excel code. Today his Excel acumen is unmatched internationally, and his web site, MrExcel.com, has earned him the title, “Mr. Excel” —and the undying gratitude of 65 million Excel users who can access resources to increase productivity overnight.

IT programmers and accountants know there is VBA programming language behind Excel, but most don’t have the skills to program it as Jelen can. “If your job every day is to import this data, subtotal it, and print it, I can write a code in about an hour that will allow you to simply press a button. That one button click will import the data, add subtotals, take the subtotals into a sheet, produce a chart and print it. Instead of 15 minutes, it takes you 15 seconds and reduces the chance of errors,” Jelen said.

In addition to programming, Jelen also helps those who prefer to help themselves. His instructional books and website resources at MrExcel.com are used worldwide as a portal for learning spreadsheet tasks like preventing duplicate data entry, calculating hours worked when the shift spans midnight, deleting unwanted links and hundreds of other Excel tricks. In 2003, Jelen literally wrote the book on Excel: Mr Excel ON EXCEL, published by Holy Macro! Books and heralded as the definitive “Excel how-to.” He also markets three Excel-based software applications for auto dealerships, plumbing and home construction industries, and is developing more as demand arises.

Born on Feb 17, 1965, Jelen’s lifelong drive to do things better and faster began at age 11, when he began lending his paper route earnings to his older brother, Bob and Bob’s college friends. Nicknamed “Sammy the Shark” by the brother he idolized, Bill was earning $100 a month from the interest. “For an 11-year old kid it was an obscene amount of money,” Jelen recalls. The youngest of four children growing up in Salem, Ohio in the 1970’s, Jelen was an over-achiever in high school. A leader in many clubs and organizations, he more than met his goal to have the longest bio in his graduating class. He learned a strong work ethic from his blue-collar parents but strove, even as a child, to exceed them and his siblings. When Jelen was 13, his mother died. His father and brother Bob became his mentors, but Jelen was always the implementer, sailing beyond his brother by design. While they had both run the high school concession stand 10 years apart, Jelen increased prices on snacks and ensured his student council an unprecedented $150 a week in profits.

Following graduation, Jelen fulfilled his mother’s wish by attending the University of Notre Dame. But by his sophomore year, Jelen was on academic probation, failing his engineering classes. He barely pulled out the semester with a 1.0 GPA, but, subject to dismissal, he approached his engineering dean for leniency. The university mandated that he switch from engineering to another field of study. When he chose business management, his grades and interest soared, in large part due to the mentoring of Dr. Khalil Matta, a professor of Management Information System. Matta, taught Jelen a lesson that would fuel his career. “He told us, you’re getting a Notre Dame education; you’re going to get a job in the programming department. But the programming department is simply a foot in the door. If two years after graduation you’re still programming, I’m going to kick your butts.”

During his senior year at Notre Dame, Jelen became Matta’s teaching assistant. As he graded papers from a study tracking MBA students using Lotus 1-2-3, he realized that most never exceeded a 60% score. “I suddenly realized that if I could learn every answer on this test and how it actually worked, I would be the smartest person alive on Lotus 1-2-3. Learning it all was my first stepping-stone. Jelen graduated from Notre Dame in 1987 with a business management degree and began writing COBOL programs at Telxon, a hand-held computer company in Akron, Ohio. He quickly made a name for himself as a programmer who understood the frustration of the accounting and finance staff, while spending five hours to generate custom COBOL reports that might be used only once. The company purchased a $100,000 software reporting tool, but it failed to allow the accounting staff to run their own reports without IT assistance. So they hired an analyst, the only person on staff who knew the data backward and forward—Jelen.

“I had written a COBOL program to extract the data for the tool. I knew the data best and had a business degree with strong accounting and finance background so I applied for the job. The information systems director said accepting the analyst position was a bad move. But I remembered Dr. Matta’s words, that if any of us were still working in programming two years out of college, he would come kick our butt. I took the job.” As the new financial systems analyst, Jelen ran data through Lotus 1-2-3 and was able to produce in 30 minutes what COBOL could do in four hours. The spreadsheet techniques Jelen used eventually became the basis of his first book, Guerilla Data Analysis Using Microsoft Excel. In 1996, after being promoted to director of operations analysis, Jelen developed an Excel-based system to manage a revenue forecast, and virtually eliminated a manual process—and one high-level management position. That application, containing 2,400 lines of VBA code, could be managed with a single button click by an assistant. In another case, Jelen innovated an Excel royalty report application that saved $8 Million.

MrExcel.com: The Font Of Excel Knowledge

While at Telxon, Jelen was awarded two patents: a reversible keyboard for a handheld computer, and a system for ordering groceries on the Internet. In 13 years at the $500 million company Jelen was indispensable as the only employee who could extract information from the mainframe and produce reports quickly. Realizing his value, in 1998 Jelen started a website, MrExcel.com. In theory he intended to provide a platform for answering questions about Excel and other Microsoft Office programs and write a book based on his solutions. But by 2000, Telxon folded, and with foresight, Jelen had with timely intelligence parlayed MrExcel.com into a full-time career.

Consulting virtually by email and telephone, Jelen specializes in fast turn-around—normally within hours. He created a self-help tips page and launched a message board for software users to help each other resolve problems. The self-directed message board has gained world renown filling in the void caused by slow or non-existent IT departments, expensive computer software help desks and pricey on-site technical consultants who take their time. Some 20,000-plus registered users post articles and messages and purchase Jelen’s books, CD’s and custom applications. Customers email data problems, Jelen re-writes visual basic code solutions and delivers by email.

Jennifer Holley estimates Jelen’s ingenuity saved her at least 10 hours of work each month. Holley’s Vermont web design company,WebSitesAndMore.com, creates 380 branded websites from one custom-designed template. She was spending 35 minutes saving all 380 sheets every time a piece of information changed. Within hours of her email for help, Jelen had created a macro that saved all 380 sheets as a comma separated variable file whenever any piece of data was changed.

"I have master databases that are intense and long and when I change one thing they all change. Bill's solution gave me the ability to make changes in a few seconds instead of one-half hour. When I asked if he could do the same thing and save them as a text, he did that, and now I can apply that macro to the same project as a text file. Bill Jelen truly is ‘Mr. Excel’ ” Holley said. MrExcel.com draws over 10 million page views a year, and its worldwide staff of professional Excel gurus answer tens of thousands of questions, giving away valuable knowledge in quick response for free. Jelen said the site often answers problems for companies who either have no IT department or can’t get the one they have to respond.

Internal tension arises when an IT department, with a backlog of requests, does not fulfill the accountant’s needs. “When it takes three months for a programmer to get there, the guys in accounting don’t wait for IT. They have the admin manually import data to Excel day after day. This is both time-consuming and error-prone,” Jelen said. “For less than the cost of doing it manually, in four to eight hours I can automate it with Excel VBA.” Jelen spent 3 years in IT and 10 years in accounting and finance. “I’ve lived both sides. I know why the programmers are under pressure and I’ve seen the results in accounting. I know how bad code complicates your job. A single shortcut by IT might mean a few extra mouse clicks for the accountant. If the accountant is posting 180 journal entries a month, those 32,400 extra mouse clicks over the five-year life of the program adds 45 hours of work for the accountant. My mantra is to write programs to save time for the client.”

MrExcel products include a house scheduler utility, a custom plumbing quotation utility and “F&I Menu Wizard”, a proprietary program for car dealerships that dramatically streamlines the finance process. In 60 seconds, the car buyer can see all available products. A former 50-minute sales pitch now takes three minutes. The software can be purchased at: FIMenuWizard.com. The house scheduler utility makes it possible for a builder to automate and streamline the cumbersome scheduling process.

Jelen conducts usage and programming seminars and speaking engagements on Excel and the Microsoft Office suite. In addition to "Learn Excel from MrExcel", Jelen is the author of "Guerilla Data Analysis Using Microsoft Excel", "VBA & Macros for Microsoft Excel", "Pivot Table Data Crunching", "Excel for Teachers", "Power OneNote" and two CD ROMS, "2500 Excel VBA Examples" and "Excel Knowledge Base". The books can be found at Amazon.com, Barnes & Noble, Micro Center stores and at MrExcel.com. Jelen also markets an unusual line of humorous gift items for the Excel “guru” in every office: mugs, apparel, and a Excel function wall clock (each numeral is an Excel function).

Jelen and his wife, Mary Ellen, are the parents of three adopted Brazilian children. His hobbies include a fascination for drive-in movie theatres, creating player piano rolls with rock and roll tunes, and leadership in many local civic organizations.