I have a question which I thought had been answered form a post submitted back in 2010.

I thought that as both files were in the same folder on the network, that it would be a simple task. How foolish of me

I found this code, from an old post and gave it a whirl

When I finished typing the MapDrive statement above, the word "file" was highlighted with the following compile error. 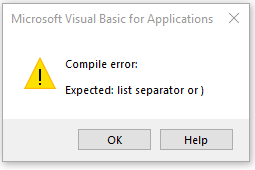 Any help (either fixing the compile error or trying some new code to access the remote server) would be greatly appreciated.

Update to above - it seems a bit of the text went awry during the post process.
The MapDrive statement should read

Andrew Carr said:
Update to above - it seems a bit of the text went awry during the post process.
The MapDrive statement should read

Well it did it again -
I'll attach an image