I've started a one month trial of Office 365. When I did the installation of 365, my 2010 version was left intact. I compared the speed of the two versions by opening them one at a time and running the macro below which writes sequential numbers to a million cells and reports the time elapsed to do so. No other files or applications open. My 2010 version clocked in at 0.21 minutes (as it has for many years), while the 365 version repeatedly took twice as long.

Has anyone using 365 noticed a performance decline compared to older Excel versions?

Why does 9 mean SUM in SUBTOTAL?
Click here to reveal answer
It is because Sum is the 9th alphabetically in Average, Count, CountA, Max, Min, Product, StDev.S, StDev.P, Sum, VAR.S, VAR.P.

I had way too many issues with 2019: corrupting my existing workbooks built in 2007; it did run slower than 2007 although I did not measure the times. The difference was
very noticeable by just using 2019; I received numerous complaints that what I coded in 2019 was not usable by others ... not all projects but just a few. That is when I decided
enough is enough. I uninstalled 2019 and went back to 2007.

I had way too many issues with 2019: corrupting my existing workbooks built in 2007; it did run slower than 2007 although I did not measure the times. The difference was
very noticeable by just using 2019; I received numerous complaints that what I coded in 2019 was not usable by others ... not all projects but just a few. That is when I decided
enough is enough. I uninstalled 2019 and went back to 2007.

Thanks for sharing your experience. Any concerns, particularly regarding security, without Microsoft support for 2007?
I 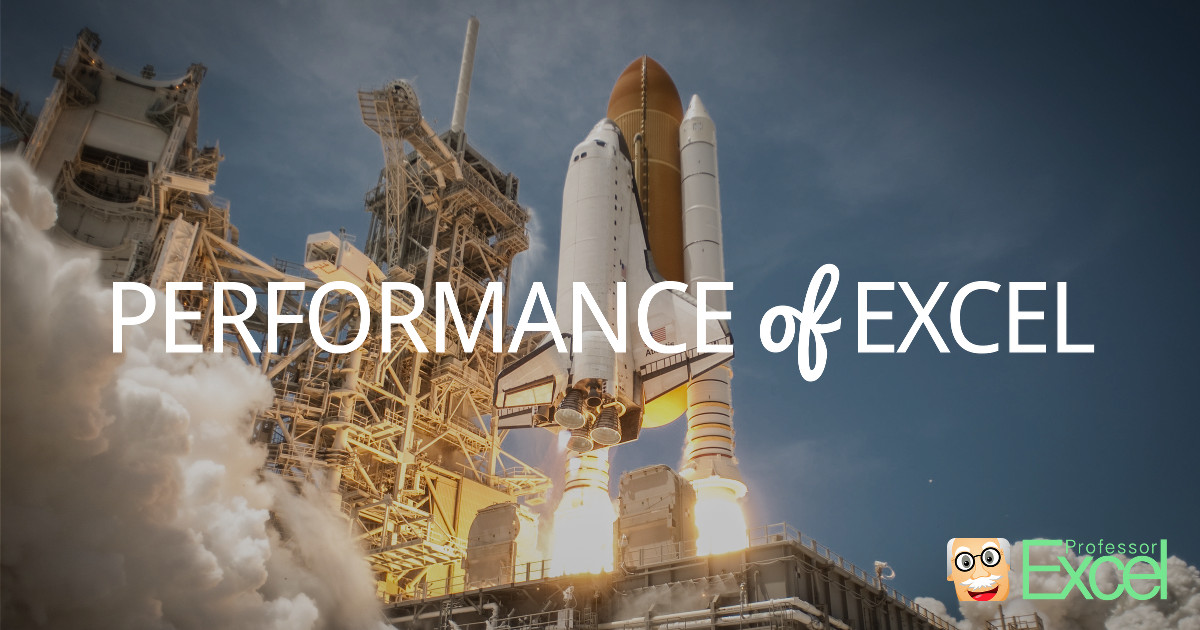 Performance of Excel: Study on How to Speed up Excel up to 81%

Increase the speed of Excel? We measured, which tricks really boost up the performance of Excel. Here is how you can save up to 81% of calculation time.

In my experience, every version of Excel gets slower. I stuck with 2003 for as long as I could, briefly dabbled with 2007 but it was so buggy and horrible that I dumped it as soon as 2010 came out. 2010 probably replaced 2003 as my favourite version, but didn't work that well with multiple monitors, and I was the only person at work who had Power Query installed which meant I couldn't use it as much as I wanted to. We have now moved to 2016 (even though we have 365 licences), which I don't think is quite as solid as 2010 was, but has all the good BI stuff more baked in and is much easier with more screens. Ideally, I'd like 365 because of the new functions. It has seemed pretty stable in my home usage and I haven't had any significant issues with VBA performance - everything that is processed in memory seems to happen just as fast. I seem to recall Charles Williams saying that something had been changed in the way that screenupdating works, so it's not quite as effective now - I'll see if I can locate that info.

"Thanks for sharing your experience. Any concerns, particularly regarding security, without Microsoft support for 2007?"

Well ... of course when you click on HELP all you get is a notice that 2007 is no longer supported. But that has never caused me any problems because I get
all my assistance from GOOGLE and folks on the FORUMS.

Now, if by "security" you are asking if 2007 is any less safe than the newer versions ... Excel has never been secure so no worries.

Interesting study. Looks like having the ENGLISH version of Excel and a computer with multi-processing is the best means of speeding up Excel.
Any advantage in other regards as studied are so small to be almost non-existent (to me at least).

When I tried Excel 2019 ... the program itself was slow. Just opening the program ... just opening a new workbook ... just changing from one sheet to another.
It was noticeable to the eye ... slower than 2007. Then when doing the same calculations in a database, compared to 2007, again it was noticeably slower
than 2007.

This study IS very interesting as I run both 2010 and 365. I wish there were studies that compared any/all of the Excel versions with the option of using an interface with another application that processes data and, especially, arrays. I have not done thorough testing and comparison but have often found that writing "complex" algorithms or using VBA in Excel can be greatly improved upon in performance with an interface to APL (highly suited for array processing) so that the heavy number crunching is done in APL and the results returned to Excel. I wonder if there are other such experiences with Excel and other "languages."
J

Logit said:
Now, if by "security" you are asking if 2007 is any less safe than the newer versions ... Excel has never been secure so no worries.
Click to expand...

By security I was thinking more about software flaws that, while supported, get patches applied from time to time by Microsoft to reduce the risk of your computer being hacked. I'm still getting this support for Office 2010, but it will end next month.

Of course updates just for 2007 are non-existent. MS has done all the updating they are going to do. Actually this is a preference for me. I really disdain updates EXCEPT for anti-virus updates to the OFFICE software package on a whole. So, I receive updates to Win 10 but nothing any longer to OFFICE 2007. Again, I am ok with that because my anti-virus is always up to date.
You must log in or register to reply here.

Anyone else having inexplicable bugs with Excel 2013?