If Chip Pearson's website ever helped you, please jot a note...

Chip's website was well organized, his explanations lucid, and his code meticulous. I bet over the years I read most of it. I would visit in search of a solution to some immediate need, but always overstayed when some shiny object caught my eye: "Ooh, this looks interesting!"

As I got better, I vectored OPs to Chip's site. His pages on debugging VBA are, to me, the most valuable information toward improved coding skills I have ever seen -- there is no better path than learning to fix your own problems. Maintaining his site would be a gift to the community for as long as VBA remains a viable programming language. It is an impressive opus.

My condolences to Chip’s parents for their loss. I have to agree with the consensus listed here; Chip’s site is indeed a valuable resource and repository of his knowledge.
I have used Chip’s site many times over the years and also directed others to take a look at it to solve their particular coding problems. In particular the section on date calculations have been very useful to me. It remains in my shortcut list as a favourite.
Please keep the site open if at all possible; it’s a valuable resource for all.

Greg Truby said:
This week I have been working with Chip's hosting company and his domain registrar to get those accounts transferred over to Mrs. Pearson's control so she can get the site back up and running. I think we're almost there. So if you've tried his site and haven't gotten in, please keep trying. Hopefully we'll get it back online in the coming days.
Click to expand...

Ah so you're the "other mystery caller" who the hosting company wouldn't identify! I was getting worried that someone was going to try for financial benefit by resurrecting the website as a business (especially given the timing of the domain expiring in a couple weeks.)

THIS IS FANTASTIC NEWS and I thank you for your time and effort in this. I think we all agree that it's imperative that the site live on as Chip's legacy, and to help millions more. (I will try to contact you privately about some specific matters.)


Greg Truby said:
... I told them that Chip had helped hundreds of thousands, perhaps even millions of people all over the globe. While they knew Chip was a Microsoft Excel MVP, I don't think they had a real appreciation for just what a titan Chip was in the Excel world; which is why Mrs. Pearson had Chip's website taken down after his death.
Click to expand...

I think you're going to have to call Mr. & Mrs. Pearson back and let them know your estimate was off.

I spent hours on various archived versions of the site from a number of sources, consolidating facts and stats, mostly from Chip's own notes that he would tally up every couple years. It appears that he gave up trying to keep track of site traffic since it was consuming time he could spend answering emails and phone calls. His last count was almost 5 years ago but I found a pretty solid data source so I could estimate the usage since then . Even as "VBA usage as a whole" has decreased in the last number of years, cpearson.com site visitor counts were *never* lower than the previous years; always a increase.

So I think this figure would have been a surprise even to him. In the last few years cpearson.com the average day for the site consisted of 50,000 unique visitors reading 80,000 pages.

All things considered (and estimating on the low side) the total traffic since the site was registered in 1999 was:

Chip was averaging 1 site visitor every 1.7 seconds. Half a million zip files were downloaded per year.

That's a lot of traffic - especially considering the site consists of only 500 pages and 300 downloadable files... that shows just how valuable the site "golden content" really is.

I'm slapped together some charts. (I'm a little embarrassed with the quality of of them considering the topic, but I wanted to get this posted ASAP!) 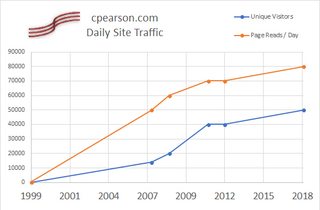 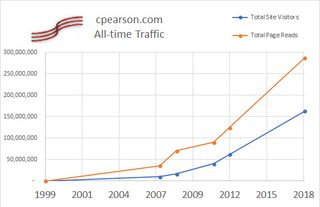 Although Chip had originally set out with the purpose of teaching himself PowerPoint, he quickly realized the satisfaction that can be achieved from helping others. In a post from 1999, Chip discussed his excitement at having reached 100 daily visitors, saying "I feel like the king of the world!"

Years later he had to set some boundaries for people emailing him with questions, because he was receiving thousands of emails per day and opening every single one. He set out some basic rules, "use spell check, be specific, poor writing is a pet peeve, and don't attach files" (since that extra time in opening attachments would reduce the number of people he could respond to in a day). Yet even when putting his foot down he was still apologetic for not replying to everyone personally.


Chip Pearson said:
...include it any any applications that you create, including commercial works and works for hire. This distribution is royalty-free and may be done without any license from me. I would appreciate a reference to my page in the source code and in any printed documentation.

This attribution, however, is optional. Do what you feel is the right thing to do.
Click to expand...

It sounds like we have a chance to get the site back up and running, and we're going to have to work together to make that happen. That act of binding together will in itself will be an amazing legacy for "King" Chip Pearson to leave us.

Just to say that the site is back up now, my thanks to all involved in getting it up and running.
Especially I would like to give my thanks to the family for the consideration they have given to others at this sad time.

Thank you to everyone, especially Greg, Bill, and Chip's parents. My condolences to his family for the loss.
The Excel community lost a great member, but it is nice to know that his legacy will live on with his site (which I often quote myself in helping people).

ashleedawg said:
Ah so you're the "other mystery caller" who the hosting company wouldn't identify! I was getting worried that someone was going to try for financial benefit by resurrecting the website as a business (especially given the timing of the domain expiring in a couple weeks.)
Click to expand...

Back atcha there, sunshine. Bill and I had already contacted his hosting company and made sure they knew the score, so there was never any danger of his hosting company reactivating the site without the Pearson family's consent. The real threat was some internet carpetbagger buying the domain and using Chip's hard work for their own gain. While its expiry was more than a couple of weeks out, it was a concern we needed to address. I am pleased to state that I have seen to it that Mr. & Mrs. Pearson now have control of Chip's account with his domain registrar and thus this threat has been neutralized.


ashleedawg said:
THIS IS FANTASTIC NEWS and I thank you for your time and effort in this. I think we all agree that it's imperative that the site live on as Chip's legacy, and to help millions more.
Click to expand...

Indeed it is fantastic news. I'm just glad I could help. And nice work on the traffic analysis.


MARK858 said:
Just to say that the site is back up now, my thanks to all involved in getting it up and running.
Especially I would like to give my thanks to the family for the consideration they have given to others at this sad time.

Link to the site topic index
Click to expand...

Mark has beaten me to the punch. Yes, Chip's host e-mailed Mrs. Pearson this morning to inform her that his website should be back up and running. I have gone out and checked the home page and jumped around, following a few links and everything appears to be in order. If anyone finds something amiss, please private message (PM) me here and I will forward the issue to his hosting company. But please confine your PM's to just issues of the site loading/rendering. As ashleedawg has already pointed out, trying to answer specific questions about how to apply Chip's articles would overwhelm anyone.
Last edited: May 9, 2018

First, my deepest sympathies to Chip's parents - I can't even begin to comprehend what they have been through.

Second, my sincere thanks to all involved in resurrecting Chip's site. Its worth to the Excel world is frankly incalculable, and it is a truly fitting memorial to Chip's great mind and huge generosity of spirit. I certainly wouldn't be half the programmer I am today without the wealth of knowledge I gained from him, and judging by the sentiments I have seen expressed on every forum or newsgroup I frequent, the same is true of so many others.

I only hope that the reaction of the community can be some small comfort to his parents at this time.

A very sad loss to the family and friends and associates. His website and generosity helped me (and many others) over the years.
If there is a need to contribute to the cost of hosting his site, count me in.

My condolences to Chip's parents. As you can see, your wonderful son touched the lives of many, MANY people around the world. He shared his knowledge freely and it was truly helpful. He will be missed.

I have only just learnt of the passing of Chip Pearson .. I am so saddened to hear of this piece of news.

I would like to express my deepest condolences and respects to his family and friends.

His very well oraganised and easy-to-use website has always been my first reference to findng answers to many of the VBA programming problems I have encountered... His passing is no doubt a big blow to the entire excel community and I couldn't thank him enough for all his generous contibutions to helping excel users worldwide.

Thank you Bill and Greg for your efforts in getting Chip's site back.