I have a UserForm with a ListBox that is populated from a row source reference .... IndivStudentSelect!V14:w44

When a student name is clicked from inside that ListBox list, the chosen student name is supposed to appear in the following Control Source reference ... IndivStudentSelect!AH15

Obviously, in the ListBox properties display, the student name that was clicked on, appears beside the property called .... Text

This Userform (and Listbox) has worked for several years and no changes have been made to the spreadsheet to which the UserForm is related.

However, in the last 12 hours, the student name will appear beside the property called Text (as it should), but disappears after 5 seconds.

Here's an image of the relevant component of the ListBox properties display when the name is correctly displayed beside the property called Text ... 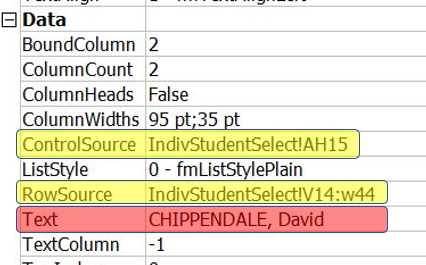 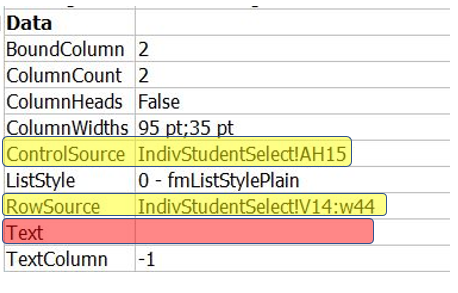 It has never done this before, but is a big problem now, as it no longer displays in it's allocated Control Source location, so all features of the userform that rely on a name appearing there, no longer work.

Does anyone have an idea why this might have started happening, and if so, what can I do to fix it ?

How can you turn a range sideways?
Click here to reveal answer
Copy the range. Select a blank cell. Right-click, Paste Special, then choose Transpose.

We would have to check the properties of the userform and the file.
You could upload a copy of your file to a free site such www.dropbox.com or google drive. Once you do that, mark it for 'Sharing' and you will be given a link to the file that you can post here. If the workbook contains confidential information, you could replace it with generic data.
You must log in or register to reply here.