If you like this content, please consider visiting the video on YouTube and subscribe to the MrExcel Channel to show your support!
This video has been published on Dec 7, 2012 .
As Bill started recording the ModelOff Finalists for this week's podcast series, he'd noticed something rather unusual: one Finalist would constantly hit F2 and Escape in order to Toggle the Formula and Value in the Cell...
Why? Because it takes too long to move your line of sight up to the Formula Bar and back. When Bill asked about this, it lead to a new discussion about the danger of the F1 key and how to resolve that issue. Follow along with Bill in Episode #1613 to gain a better understanding, as an Excel User, of the dangers involving the F1 Key, Scroll Lock, Cap Lock and More.

ModelOff is a worldwide competition to find the best Excel modellers with a $25,000 cash prize. For information on next year's competition, visit http://www.modeloff.com/modeloff-2013/

...This blog is the video podcast companion to the book, Learn Excel 2007 through Excel 2010 from MrExcel. Download a new two minute video every workday to learn one of the 512 Excel Mysteries Solved! and 35% More Tips than the previous edition of Bill's book! Power Excel With MrExcel - 2017 Edition

Visit us: MrExcel.com for all of your Microsoft Excel Needs! 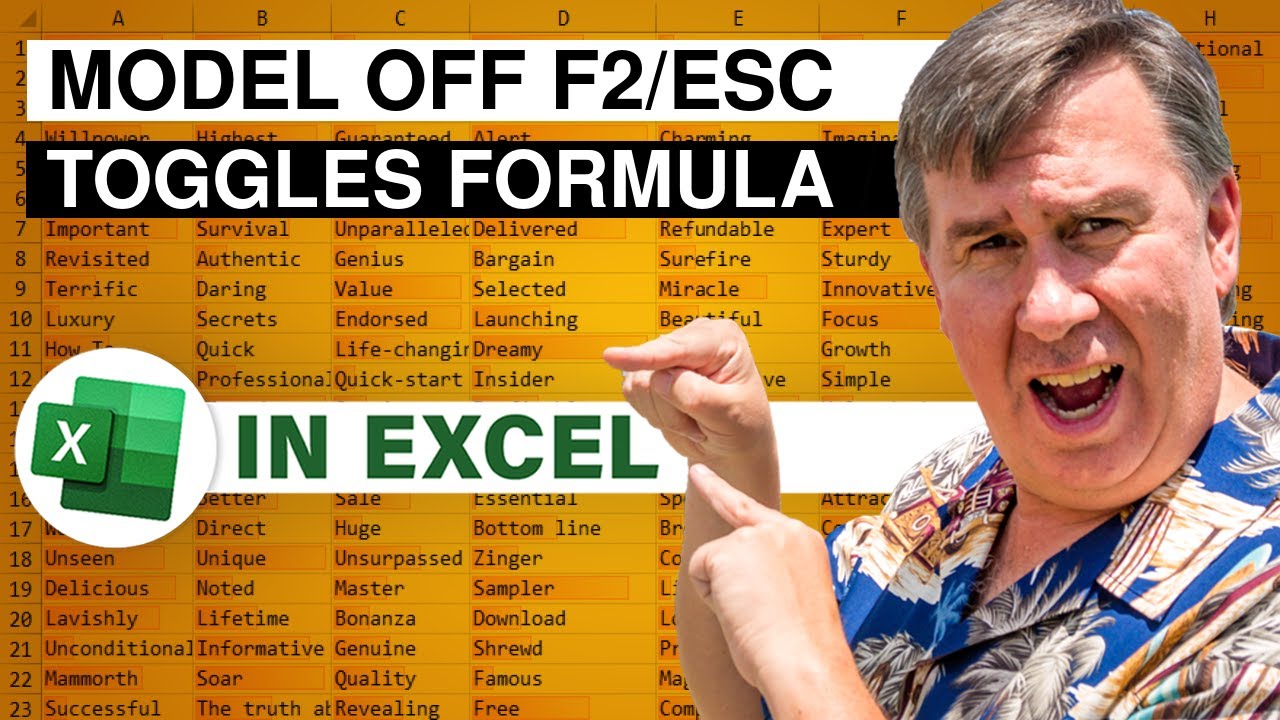 Transcript of the video:
Hey, welcome back it’s time for another to MrExcel netcast.
I'm Bill Jelen.
Today’s topic, F2-Esc (with keyboard mods).
All right so, you know, as all week I've been talking about being out at the ModelOff world, Financial Modeling Championships, there were 16 finalists there from around the world and the one thing that struck me is, they were insanely fast at Excel, they hardly ever touched the mouse.
You know, Alt+E+ S+ V for values, Alt+E+ S+T for formats, Alt+E+ S+ F for formulas.
They knew all of those tricks, but I want you to watch something.
Now, we're going to see this podcast next week, but right now I just want you to watch the screen.
Watch how Martin, toggles back and forth between formulas and values here.
Okay, now what you're seeing there is, you're seeing the formula and the value toggle in the cell.
All right and as I was watching Martin show the various tricks, he recorded three different podcasts for us.
I noticed that his left hand was constantly, constantly going back and forth between the F2 and Escape.
F2 shows the formula, Escape shows the value, F2, Escape.
And then his other hand would be on the arrow, so he could very quickly move and see each formula in its spot.
Okay now, this is wild, right just six rows up is the formula, but Martin is so focused for him to look up to the formula and back to the cell takes too much time.
All right so, F2, Escape, literally he's doing F2,Esc three times a second.
All right, as he is he's traveling around.
I said that's pretty wild, and he said to me he said, well the danger there is as you're hitting F2, Escape.
If you would accidentally hit the F1 key, hitting the F1 key is a disaster because it takes seconds, and seconds, and seconds for Excel help to appear.
You know, that was horrible probably 12 seconds, but in real life it's about six seconds and when you're doing this many key strokes per second, a 6 second delay is just horrible.
Yeah, I mean he might as well go to lunch with such a long delay.
So, he actually removed the F1 key from his keyboard.
So, I went back to the room where all of the finalists were gathering and we talked about this.
Here's some video, Who wants to remove F1 from the keyboard?
Contestants: Right here Bill Jelen: What?
Everybody?
Why would you remove F1 from the keyboard?
Contestants: Because if you hit it, the help pops up and then you have to go and click out of it.
It’s a waste of time.
Bill Jelen: Anyone actually removed F1 from the keyboard?
Contestants: Yes, always.
Bill Jelen: You got to be kidding me.
Everyone in the room?
Contestants: IT departments would not like you very much, but your manager will like you more.
If you get it off, you can re-attach it, so right before I hand it the computer I just throw the thing back on.
Get a drawer full of keys.
Bill Jelen: Okay, anything else any other keys you remove from the keyboard?
Contestants: Scroll lock, Insert, Caps Lock.
Bill Jelen: Scroll lock, Does anyone actually use scroll lock on purpose for any good reason?
Contestants: No Bill Jelen: Insert, what's up with Insert? Why do you remove Insert?
Contestants: If you hit Insert in Word, it automatically overwrites it.
It’s close to Home, and End, PageUp and PageDown, which you actually use.
Bill Jelen: So it gets in the way.
Contestants: Just like F2, you know with F1.
Bill Jelen: All right now, I have to put you on the spot here.
You're talking about this product called Word, I think I've seen that, that's an add-in that they give you for people that can't write their letters in Excel, All right.
Contestants: Yeah!
Bill Jelen: All right okay, all right so, we're going to remove F1, Insert and Scroll Lock.
Anything else we want to remove?
Contestants: Caps Lock.
Bill Jelen: Caps Lock.
Contestants: We never use Caps Lock.
If you want to it, use your pen, after you have removed the key you can use a pen.
Bill Jelen: You can use the pen to actually do Caps Lock.
All right fascinating, that's funny you know, there's a lot of people who rely on F1 in Excel, but if you're in this room, I guess you're way beyond F1, aren't you?
All right, well hey this, this great looking group here.
These are the 16 Excel rock stars, that won a free trip to New York City for the financial modeling competition tomorrow.
Everyone should enter it for next year 2013, you could be here.
All right, thanks everyone.
So, on the day of the event you know, in the room everyone's working for several hours on the round 3 and round 4.
Many people who traveled from Europe, Australia, New Zealand, brought their own equipment including their own keyboards.
Here's a picture of a few of the different keyboards that I saw in use that day, literally F1 key is just removed, and a whole bunch of keys on the other side just not necessary, dangerous if you hit them, they actually removed them.
That is hardcore Excel.
All right, so our tip for today F2, Escape, great way to toggle back and forth between formulas and values and if you ever get to the point where you're as fast as these people.
F1 key you can just pry it off, save it, that way when you turn the computer back into IT you can slip it back on.
Check out the ModelOff, you can pre-register for next year at modeloff.com.
Hey, I want to thank you for stopping by.
We’ll see you next time for another netcast from MrExcel.