Save as PDF using button

I would like to create a button that saves a pdf to specific folder based on the customer name.
also i would like the file name to be a combination of the info that is in the cells.

for example:
this is what i have currently on my spreadsheet that i want waved as pdf.

is this possible? or am i asking for a miracle.

if it cant be saved to a specific folder based off of the company thats fine i would want it to go to C:\Users\-Len\Desktop\Diverse\Customer Estimates

thanks for the help.
J

if I run the macro and run it a second time I get the an error; I run the debug and it highlights this.

You're using the wrong macro. Use the amended one in post #7.
J

oh wow now i just feel silly. I am so sorry.
So that one works perfectly!!! Thank you.
How do i do the same thing but saving as an excel workbook?
im assuming its gonna be the same code with some minor adjustments?
F

So I did the change. But it gave me some issues.
I just have a couple more questions(in red) . I did try and fix it myself. Unfortunately, I just don't know quite enough about the VBA codes to figure it out ;p

VBA Code:
You will probably need to convert the formulas to constants . If so, add this line at the end of the macro :

when I run the debugger it's highlighting
Sub Save_Sheet_In_New_wb()

I also don't know anything about converting formulas to constants.
Will that wreck my formulas or formatting or settings?
F

Try changing the macro name to something else (any error message displayed?)

Converting to values will remove the formulas in the new workbook.
Otherwise some formulas will contain links to the original workbook, which means the new wb will be updated for any changes to the linked cells in the original wb.
It's up to you.
J

I'm having issues with this code. I have put this on a newer computer so i assume that the version of excel is newer.
the part that is giving me issues is ActiveSheet.ExportAsFixedFormat Type:=xlTypePDF, fileName:=fileName

This is what I currently have. 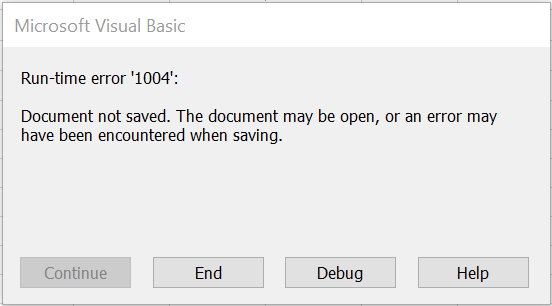 J
save as using a vba button more than once

Mar 24, 2021
justundertall
J
H
save file and create folders and sub folders based on condition

Apr 12, 2021
Hasson
H
L
create folders & subfolders and move files to them based on files names

May 5, 2021
leap out
L
J
Auto save as pdf by having file name as sheet name in Excel VBA Macro