Names of checkboxes on UserForm disappeared

I just discovered some very strange behavior in my workbook. It's used by several people (mostly on Excel for Mac), and is passed back & forth between Excel 2019/365, Excel 2016, and Excel 2011. Most of the time, it works on all three platforms without issue. However, today a user contacted me because they were getting an error that said "Compile error in hidden module" and then said the name of one of the UserForms. The code is password protected, so no one is able to get into but me.

I unlocked the code and clicked the button to open that UserForm, and it failed on a line in the Initialize sub. The line was setting a checkbox to True. I looked at the Properties of that checkbox, and discovered that the Name was missing! Take a look at the image. You'll see on the left, next to (Name), there is nothing. 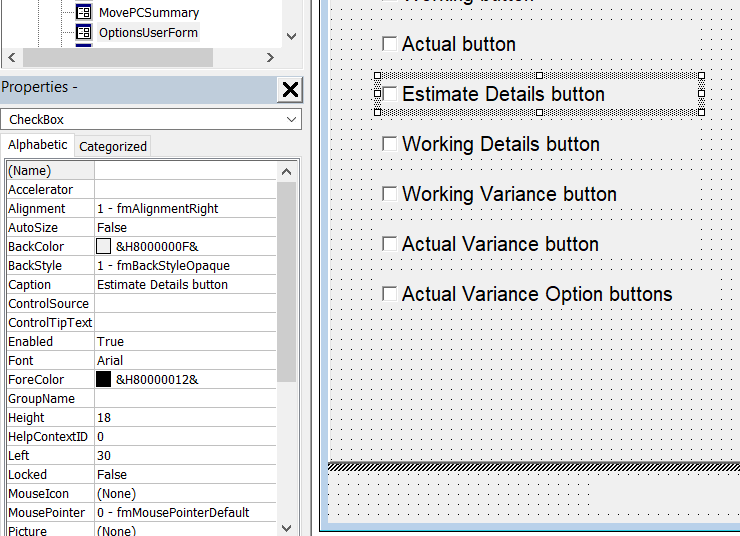 I can assure you, every single checkbox had a name when I released the file publicly. I seriously doubt any of my users would break the password on the file just to go into it and remove some named of checkboxes, so I'm trying to figure out how this could have happened. Anyone ever seen this kind of thing before?

By the way, this was not the only checkbox this had happened to. It was like this on 4 or 5 others -- all were on the same page of a MultiPage UserForm.

Which came first: VisiCalc or Lotus 1-2-3?
Click here to reveal answer
Dan Bricklin and Bob Frankston debuted VisiCalc in 1979 as a Visible Calculator. Lotus 1-2-3 debuted in the early 1980's, from Mitch Kapor.
D

I don't have a solution for you, but I will say that I encounter the "Compile error in hidden module" message (and then the name of the problematic module/sheet, etc) fairly frequently. I use 64bit Excel and that message always comes up when I load a workbook with macros that hasn't separated out the 32-bit API declarations through conditional compilation. Could that be why the message occurred in the first place?

As for the weird userform/checkbox behaviour, I did come across a similar issue yesterday where I was opening someone's older file and(a) I got the above error message; but also (b) I got another error message where something (I can't remember what it was - worksheet? control? userform?) was using a protected name, and so Excel went ahead and renamed it. It kept on giving me this error message until I saved the doc and closed and opened it again. Judging from your screen capture, though, the userform name (OptionsUserform) shouldn't be a protected name, I think. What was the name of the checkbox?

Sorry I can't be of any help.

mcomp72 said:
I seriously doubt any of my users would break the password on the file just to go into it and remove some named of checkboxes
Click to expand...

You can't completely delete the name of a control - the IDE won't let you - so I'd suspect your workbook has a problem, most likely caused by the round-tripping between Mac and Windows versions, I'd guess.
M

Dan_W said:
Could that be why the message occurred in the first place?
Click to expand...


Dan_W said:
What was the name of the checkbox?
Click to expand...

Could it be an issue of the name being too long? The has been in use for over a year, and I had never seen this behavior before, so I'm guessing probably not, but if anyone knows of a character length issue with naming objects on a UserForm, let me know.
You must log in or register to reply here.