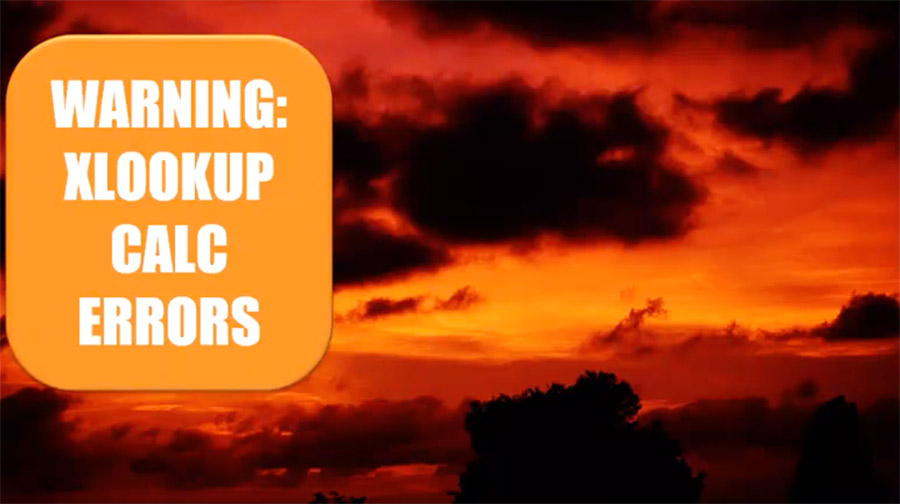 An exciting change happened to the XLOOKUP function in the Office Insiders update that came out November 1, 2019. Many Insiders will be receiving this update as they arrive to work on Monday November 4, 2019.

If you’ve been using the new XLOOKUP function and if you’ve used the Match_Mode argument to look for the value just larger or just smaller, your existing XLOOKUP functions are going to break.

The new change to XLOOKUP: the If_Not_Found argument, which was originally added as an optional sixth argument, has been moved to be the fourth argument.

Consider the following formula, which was previously asking for the next larger match:

However, once you edit the lookup table, then Excel recalcs all of the XLOOKUP functions that used the table. Before the change, you were asking for an Approximate Match that returned the next larger value. After the change, you are asking for an Exact Match (because your original formula does not have a fifth argument) and also accidentally specifying that if an exact match is not found, then you want to insert a 1 as the result instead.

"It is really an insidious game of whack-a-mole," said Bill Jelen, publisher of MrExcel.com. You press F2 to look at a formula, and the formula stops working. Other formulas in the worksheet might appear to keep working, but they are a ticking time bomb waiting to become wrong when a recalc is triggered."

When you sign up for the Office Insiders program, paragraph 7c of the Terms and Conditions says that "We may release the Services or their features in a preview or beta version, which may not work correctly or in the same way the final version may work."

The Excel team advises that you need to adjust any XLOOKUP formulas that were using the optional arguments. If you have been using XLOOKUP frequently, the following code will examine a workbook and identify possible problem formulas.

Following code looks for the formula cells starting with =XLOOKUP and containing more than 2 commas.

Following code is using Regex to find multiple XLOOKUP functions used in the same formula, or used with other functions may contain additional commas.

* You need to add Microsoft VBScript Regular Expressions reference in Visual Basic to use this code (Tools > References in VBA).

[B]I want to copy entire row if CountA <>0 for column J7:AM7 (headers on J6:AM6) and so on till the last used cell is column D and paste the entire ro

I have created a Table in a Worksheet which is locked to prevent user errors and protect formula. Some of the cells require freetext entries which req

Hello all, Don't think this has ever been asked before, but how do I restrict file save [Before_Save Event] if the name of the file being saved is a

hello i need help about my code when i search by code in textbox it doesn't show anything this is my data [ATTACH type="full" alt="1.JPG"]

Hi, i’ve got a long sheet filled with weights such as kg,g,L & ml. i can build a formula to convert kg into g and liter into ml. How ever, my formu