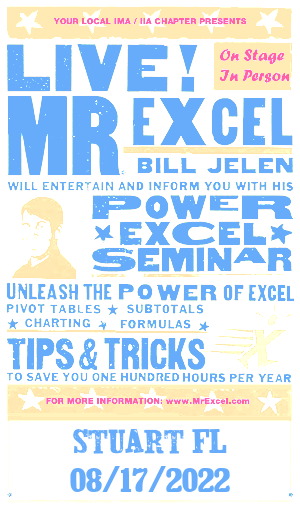 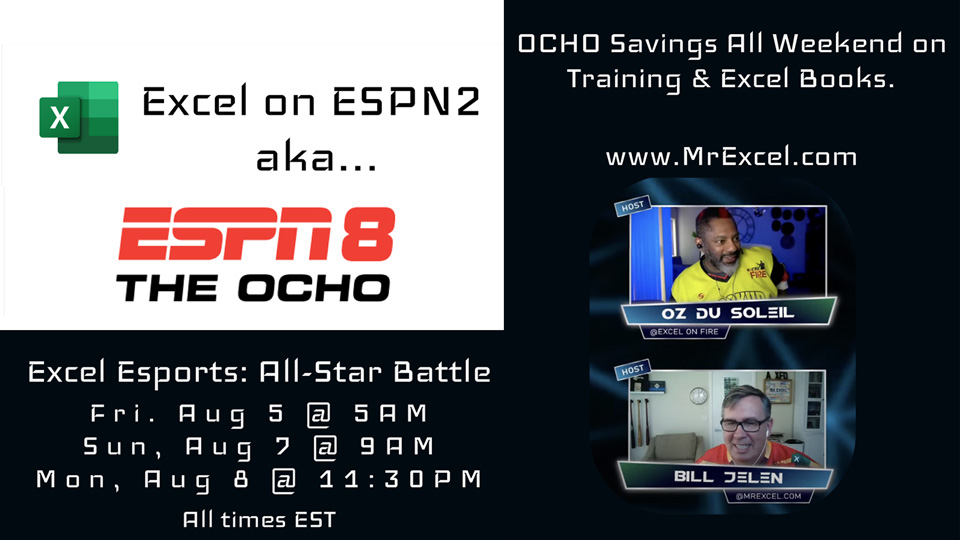 "In my live seminars, I frequently get a laugh from the audience when I explain that I am hoping to get Excel to be a sport in the Olympics," explains MrExcel.com host Bill Jelen. With confirmation that cable sports giant ESPN will be devoting 30 minutes to covering the Excel All Star Battle co-hosted by Oz du Soleil from Excel On Fire and Bill Jelen from MrExcel, "I feel like this is the first critical step towards having Excel as an Olympic sport by 2060. ESPN2 has an average audience size of 900,000+ viewers. It will bring competitive Excel to a whole new audience."

Billed as "your number one destination for Seldom-Seen Sports", ESPN8 The Ocho is an annual programming special brought to you by ESPN. The 2022 edition will feature classics such as Slippery Stairs Climbing, Table Hockey, Wiffle Ball, and Air Guitar. While the event has previously been relegated to the streaming-only ESPN3, this sixth edition of ESPN8 The Ocho will be broadcast on ESPN2. See the entire 24-hour schedule at ESPN8: The Ocho Returns Aug. 5th for Sixth Year; Features Day of Live Events from Rock Hill, SC.

Originally meant as a joke in the 2004 movie Dodgeball: A True Underdog Story. In the movie, a new competitive dodgeball league was so unpopular, it could only find a home on the fictional "ESPN8 The Ocho". However, the ESPN8 announcers, Cotton McKnight (played by Gary Cole) and Pepper Brooks (played by Jason Bateman) dryly delivered such classic lines as "This sport doesn't build character. It reveals it" and "It looks like the clock is about to strike midnight on this Cinderella story". For the best of Cotton and Pepper, check out the slightly-NSFW video.

Originally conceived by the team behind the Financial Modelling World Cup, the Excel All-Star Battle pits eight Excel superstars against each other. In the first round, all eight try to score 1000 points by writing formulas to solve an Excel puzzle. The first four competitors to finish the case advance to Round 2.

Round 2 provides a new Excel case. The top 2 finishers advance to the finals for a third Excel case.

While the Financial Modelling World Cup typically focuses on using Excel to build financial models, the All-Star Battle is more loose and fun. You still have to use common Excel skills like VLOOKUP and What-If Analysis to solve the problems.

Mary Ellen Jelen, better known for her orchids at MrsExcel.com is a fan of the competition. "It is compelling TV. Even though I don’t spend as much time in Excel as MrExcel, it is exciting to watch the competitors sweating through these Excel problems."

This competition includes many people who have done well or won past ModelOff or Financial Modelling World Cup (FMWC) competitions:

Bill Jelen explains, "Many of these are household names in the world of Competitive Excel. Every office has those one or two Excel superstars. Each year, anyone who thinks they have the Excel skills are welcome to join the Excel competition by signing up at FMWC website." The first round of the competition involves solving Excel problems at your desk. The top 100 advance to a second round. Then the top 16 advance to events that are live-streamed for others to watch. During 2021, some of these events were live-streamed on ESPN3.

I asked organizer Andrew Grigolyunovich how it felt to bring Excel to ESPN. Andrew says, "I am truly glad to lead the team that brought Excel Esports to ESPN. I always believed that competitions between office talents could be interesting to watch. We have played around with different formats of the game before it evolved into the Excel Esports format, made its way to ESPN3 and now got promoted to ESPN2. Still, we are just partway through to the ultimate vision that I have for Excel Esports. I believe that very soon it will evolve into big in-person events, bringing thousands to esports arenas and paying prize money to the top players in millions."

During a previous competition, a large contingent in the event chat started cheering for Michael Jarman, calling themselves Jarmy’s Army. But Jelen advices, "anytime that Diarmuid (Dim) Early is competing, my money will be on Dim. He is simply the best at solving these sorts of Excel problems."

Before each competition, Early warms up by solving a previous case on YouTube and then after the competition will often post detailed videos showing how he built his solution. Check out his YouTube channel.

The color commentary for this event is provided by Excel MVPs Oz du Soleil (Excel on Fire) and Bill Jelen. Previous matches in the FMWC were hosted by Danielle Stein-Fairhurst, Tim Heng, Szilvia Juhasz, and others. While Heng and Stein-Fairhurst are well-known for their Financial Modelling prowess, Jelen and du Soleil are a bit more irreverant. Max Sych, Chief Operating Officer of the FMWC says, "I love the Oz & Bill duo commenting as one is making insightful remarks and the other is making it fun to watch." To this day, Bill and Oz can’t figure out who is the insightful one and who is the funny one.

The Excel competition will air Friday August 5th at 5AM Eastern Daylight Time on ESPN2. Jelen: "I was thrilled to get the coveted 5AM time slot on Friday. Right in the middle of the monthly accounting close activities, watching the competition before heading in to work will be inspiring."

For those who want to watch again, two replays are tentatively scheduled for Sunday August 7th, 2022 at 9 AM and Monday August 8th, 2022 at 11:30 PM. Check your local listings, as those events could be moved if another sporting event runs long.

How to Become a Competitor

f you want to show off your Excel skills and compete, the first round of the FMWC open is on October 8, 2022. Register by October 7, 2022 at FMWC website (Don't wait that long... the regular $50 entry fee is just $35 during the ESPN8 The Ocho competition).

I am loving having fun with this event on ESPN8 – The Ocho. I originally planned a big watch party at one of the local watering holes. But I could not find a sports bar who would open at 5 AM, and the Cocoa Beach Waffle House doesn't have a big-screen TV.

Seriously, though, this is a landmark day to have an Excel competition appear on ESPN, even if it is currently classified as a "Seldom Seen Sport".

Jelen bought a sponsorship during the competition, with a new 30-second commercial offering special "Ocho-themed" pricing on books and training. Come back to MrExcel.com starting on Thursday August 4, 2022 through Tuesday August 9, 2022 for special pricing on Excel & Power BI books, training, and webinars.

Two of the leading Excel channels on YouTube join forces to combat bad data. This book includes step-by-step examples and case studies that teach users the many power tricks for analyzing data in Excel. These are tips honed by Bill Jelen, "MrExcel," and Oz do Soleil during their careers run as financial analysts.